It was a pleasant surprise to come home to this after work today! 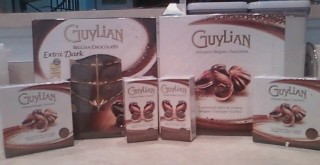 Of course while doing some blogging today, I just couldn’t resist diving in right now. 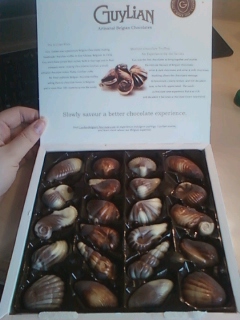 In this household, blogging and chocolates go right hand in hand!  Once I return from Chocolate Heaven, I will have a review for you.  Be patient though.  I think I might stay in Chocolate Heaven for awhile.  From just one taste, I can already tell these are some delicious treats. :)
My town is still dealing with the aftermath of Irene.  73,000 in the area are still without power, and majority of traffic lights on my route to work are still out.  Overall though, I can’t complain.  I have power.  Both my local and New England dwelling families are safe.
My brother was in Connecticut for a wedding when Irene hit.  Sadly the groom’s parents, North Carolina residents, were unable to make it to their son’s wedding due to Irene.  The wedding still went on in an old castle.  My brother and his girlfriend safely made it back to their hotel through the weather and flooding.  Safe and sound, right?  Almost.  Their hotel was hit, and was hit hard.  Power went out, and the generator blew.  At least they weren’t alone!  My brother, the ever prepared, had luckily brought his miner’s helmet/light.  Now why someone who works in finance has such a light, I don’t know.  Though his girlfriend was certainly happy he brought it!  They were in pitch black, as well as other guests.  Dime emergency lights and my brother’s miner light was the only aid in helping them see in the dark.  Like I said though, they survived.  They are grateful, consider the damage the area of Connecticut they were in.
The death toll is now up to 41.  While I understand this still is not the worst storm to hit the US, any time there is casualties, it is still sad.  Take a moment to say a little prayer, keeping the victims and their families in your thoughts.
As you can probably guess, I survived Irene.  Actually, we never lost power!  Sadly I can’t say the same for my friends and family in the area.  Most of them received word that their power (which has been out since Saturday) will not be restored to them until Wednesday.  Yikes!
Sunday morning I surveyed my neighborhood to see what damage was done.  Mostly small and large branches down, but no large trees.  Debris everywhere, but that can be expected with a hurricane.  However, the surrounding neighborhoods weren’t so lucky.
I ended up heading out Sunday to rescue friends who were trapped in their neighborhood with no power.  A very large tree had fallen and was blocking the only way out of their community.  They hiked through the woods and their community to the tree block, where I was waiting to drive them to their hotel.  As I was driving around town Sunday, I could see that there were many trees down along with many road blocks.
Late Sunday morning the mandatory evacuation was lifted and the Bay Bridge was opened.  My parents were able to go home and luckily there was absolutely no water damage nor flooding that occurred in their house.  They actually told me that Annapolis was hit harder than their town.
Driving to work this morning, there are still many traffic lights out.  Luckily it seemed most people were stopping at each light in either direction, instead of speeding through never stopping, like some people in this town often do.
Overall, I’m glad there was no damage to my home and that I never lost power.  Though it is incredible sad that the casualty toll is up to 16 so far.  Let’s keep those victims and their families in our thoughts.
Well I’m still here!  Storm hasn’t made it quite yet, but the rain and wind is picking up.  Friends of mine closer to the bay said they can see the storm coming.  The area my parents live in is under mandatory evacuation.  They will be staying with me.  Again, happy I live in a high rise and can avoid flooding.  Well, unless something happens to the roof (I’m on the top floor), and water gets in that way.  Though let’s all cross our fingers and toes and hope nothing like that happens, hehe!  Baby C has no idea what is going on.  I had him looking out the window and he just laughed and laughed at all the rain coming down.
We lucked out with no casualties during the 5.8 earthquake that occurred earlier this week.  Let’s hope for the same with Hurricane Irene.  So as for now I have power.  Though the storm is not suppose to hit till 5:00 pm (it’s 12:30 pm now), and go full strength on us till midnight.
Again, please keep you the East Coast in your thoughts and hope for no casualties!

Annapolis High School is the designated shelter for Annapolis residents. The school is located at 2700 Riva Road, Annapolis, MD 21401.
Due to the storm’s forecast, the heavy rain and winds will be hitting the area earlier than anticipated. Winds are now southeast at 15-25 mph with moderate rain reported, so the school is opening at 1:00 p.m., instead of at 4:00 p.m.

If you are in Annapolis and need assistance with transportation, please call the City’s hurricane call center at 410-260 2211.

I’m sure you know by now that Hurricane Irene is headed to the East Coast.  Our governor has already declared us into a State of Emergency.  Now I served Isabel just fine awhile back.  I also was in Florida for Andrew.  When I hear Hurricane, I’m not too worried.
However, my power never goes out.  It may flicker, but I’m one of the lucky few in this area whose power almost always stays on.  Yesterday I received a call from BGE that between 300,000 – 500,000 in my area could go out.  Hmmmm, never received this call before.  Is my lucky streak over?  Am I bound to loose power?  Fingers crossed that Irene won’t knock out my power.  That way I can still bring you deals and remind you to enter the $185 PayPal Cash Giveaway all through the weekend!
So first an earthquake, now a hurricane.  Does your family have an emergency preparedness plan in place?  If you are also in Irene’s path, how are you preparing?