Though my Christmas Tree has been up for quite some time, it wasn’t until last night did I finally take a picture of it! Every night I sit by the lit tree, watching television while working on my lap top. There is just something so calming and beautiful. Since I don’t have a fireplace, the tree is sort of like that for me. I curl up to relax for the evening by the lights and tree. Now only if I had a cup of Hot Chocolate… Oh wait! I do! Stay tune for a review that’s quite Hot Chocolate related…

I like to decorate my tree with white lights and a mix of ornaments passed down in the family and ones I’ve bought to fit a more funky style.

How do you decorate yours?

I am happy to report that Airman Ryan Dent has been located.  Thank you for all your help in spreading the word!

With a heavy heart, it saddens me to write this post.  A fellow blogger’s son is missing.  He is an Airman at Lackland, AFB in Texas. 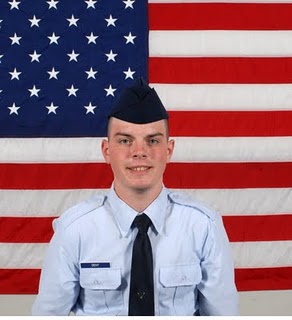 Please spread the picture around and contact Lackland, AFB in Texas if you have any info (good or bad) at 210-671-1110. He may be in the following areas: San Antonio, TX, Sherman, TX, Ft Myers, FL, or Taylor, MI. It is very likely he would be wearing a Detroit Tigers hat or shirt.
Laura Ann, we are praying and thinking of you and your family.  Hoping for your son’s safe return!
With today’s date, I just couldn’t go through the day without mentioning the importance, or taking time to remember all of those who lost their life that day.  Sometimes it is still hard to wrap my head around it.  Why did all those innocent people have to die?
I still remember September 11, 2001.  I was just a freshman, and school had only been in session a few weeks.   I crawled about of bed half asleep, and I remember that I just couldn’t seem to wake up.  Quick shower and coffee didn’t help.  I trudged upstairs to get my friend so we could walk to class together.  I remember her yelling “They’re bombing us!”.  WHAT?  I couldn’t believe it.  We watched a few minutes of the news, headed towards school, and went to our separate classes.
SILENCE.  There were roughly 17 students in my Mass Comm class, and no one was talking.  No one could say anything.  The professor walked in and asked if anyone needed to call family.  We did have one student from NYC, who the professor allowed to leave to make calls.  For the record, his family was safe.
“We can’t just sit here.  Let’s go to the pub”, our professor said.  Our school had a pub on campus with a big screen TV.  The whole class headed on over.  The pub only had a handful of other students and faculty glued on the TV.  We pushed tables together and watched.  No one got food nor drinks.  We were just glued to the screen.  Still silence.  Only the news anchor spoke.
Then the unthinkable happened.  We watched what we thought was a replay of the plane hitting the tower.  No, it wasn’t.  It was a second plane hitting the second tower.  Everyone gasped and you could see people starting to tear up.  The anchor himself was speechless.  We had just witnessed live feed of the second attack.  I can’t tell you how long we all stayed, but no one bothered to watch the clock and head to their next class.  Then we watched the towers collapse.  I never thought it my life I would ever witness something like this.
The rest of the day was spent watching TV, watching the news, not that anything else was on.  Every channel was covering the attacks.  No MTV, no Comedy Central, no Bravo.  All stations turned to coverage.  It stayed like that for quite some time.
This is a day I’ll never forget.  Never ever.  I’ll always remember that day and the lives lost, the brave first responders, and the country coming together. 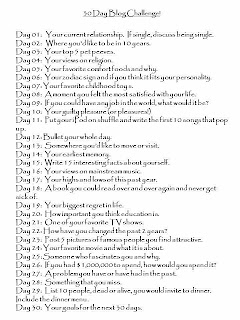 Day 1:  Your current relationship.  If single, discuss being single.
Well here I am, accepting the 30 Day Blog Challenge, and already Day One am I not wanting to discuss the topic.  So I’m going to take the easy way not, and not discuss this.
I was married to my son’s father from 2008 to 2010.  While I think my ex-husband does not read this blog, I know he has friends who do.  Out of respect, I’m not going to talk about the men/man who may or may not be in my life.  It’s that simple.  Sorry.  I’m a girl in her 20s, just loving life and willing to freely talk about my life.  However, this is one topic I’m not going to touch in this blog out of respect to him, and to protect my privacy.  Hope you understand!
I’m infamously known among my friends and family as the indecisive one. I always have a tough time making a decision big or small. Even last night it took me three hours to choose pick one of four different lights to replace my old entryway light. Yikes! That is why I was thrilled to discover that Bounce has a great new feature taking place on their Facebook page for those of us who can never quite make a decision. The feature is called the Bounce It Off Millions!  This is a great way to ask your fellow Bounce fans for help!
Starting August 22nd, Bounce fans can access the Bounce It Off Millions App on Facebook.  Once there, you can submit a question you can’t quite seem to figure out the answer.  Your question is then turned into a poll for your fellow Bounce fans to vote on!  With their input, this should help you make the right choice!

Bounce is offering four lucky users a Grand Prize of…..their question turned into a Facebook wide advertisement!  That’s right, millions upon millions of Facebook users will be able to help you make your tough decision.  During this time, Bounce is also running a sweepstakes where 5,000 winners will receive two Bounce Dryer Bars, one for you and one for a friend!
So what are you waiting for?!  Head on over and check out Bounce If Off Millions today!  You can submit your question here.  Hurry though, as this contest runs till September 17th, 2011.

Please be sure to read the Bounce it off Millions rules before participating.

Disclosure: I participated in this campaign as a member of One2One Network and am eligible for a prize drawing. All opinions stated in the post are my own.