I never had weird cravings while pregnant.  In fact the only craving I ever had was for Wendy’s Chocolate Frosties in the first trimester.  Though it seems apparently I eat weird food anyway.

For instance, at Subway, if I’m ordering tuna, I always ask them to top it with Sweet Onion sauce and lots and lots of Old Bay.  Around 90% of the time, the person in front or behind me makes a comment.  Usually it’s just the “that sounds interesting”, though last month the guy turned around and said “Yuck, that sounds disgusting!”.  Ah well.

While making small talk with someone who works in my building we were talking about what we were going to cook for dinner that night.  I told her I was in a fish mood and would probably cook a filet of salmon.  She asked how I would prepare it.  I told her probably with red cayenne pepper.  I wish I had my camera because the look of on her face was priceless.  You would have thought I just told her the most shocking secret ever the way she exclaimed “What?!?”.

So I went home, pulled out a filet, and covered it with red cayenne pepper. Added a few hot flakes on top. 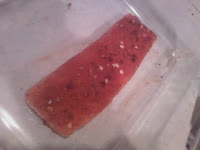 Baked in the oven for 30 minutes at 400 degrees because yes, I’m one of those people who likes her salmon dry! Took it out and wow was it delicious! Weird as some may say, but delicious. 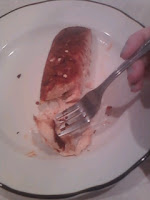 What foods and meals do you love that people just think are plain weird?