Living on the East Coast, whenever my family wanted to go to a Disney Theme Park, we headed down to Florida to Disney World. When I found out I was going to Disneyland for this trip, I was beyond excited. I couldn’t wait to see the park where Walt Disney’s vision came true. I was warned how small the park would be in comparison to it’s Florida counterpart, but I couldn’t wait to take in its charm and a new Disney experience.

That morning, all us bloggers headed to Disneyland in our #FreeLoki shirts. It wasn’t long after we walked in did the comments and questions start about our shirts… luckily all positive ones!

So you can probably guess that we were wearing these shirts to promote THOR: THE DARK WORLD. Well yes, that was part of it. However, we weren’t just promoting the film… we were there to experience the new THOR: TREASURES OF ASGARD EXHIBIT in Tomorrowland at Innovations! 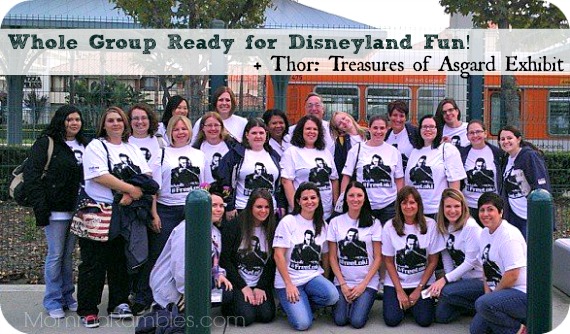 Orignal photo by Marshall Weinbaum. Edits by me.

We enjoyed a fun day together that morning in Disneyland, but I’ll get to that in a minute, I promise! I first want to chat the exhibit! It’s definitely a must see for any Marvel fan. It was actually pretty awesome that us bloggers were the first “tourists” to experience Treasures of Asgard.

When you walk into Innovations, the exhibit is upstairs. Once you reach the second level, you’ll actually be greeted by the Iron Man 3 Expo! The Marvel geek in me was just so excited when I spotted all the suits. I seriously am going to have to bring my son back to this one day. He’s only 2, but boy does he know his Avengers! He’s a HUGE Iron Man fan.

While waiting in line for the main Treasures of Asgard exhibit, you do get to take a look at other treasures and weapons of this far off land. Pretty cool if you ask me! 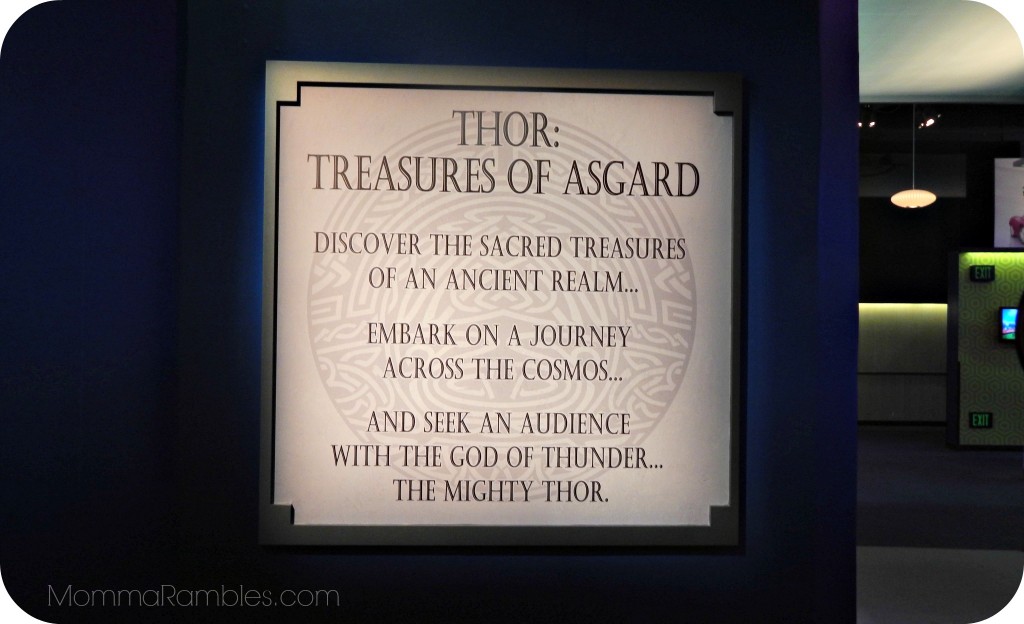 As you walk through the line, you then head into another room full of other treasures, such as an Asgardian helmet (as seen on Thor) and Loki’s famous helmet as well! 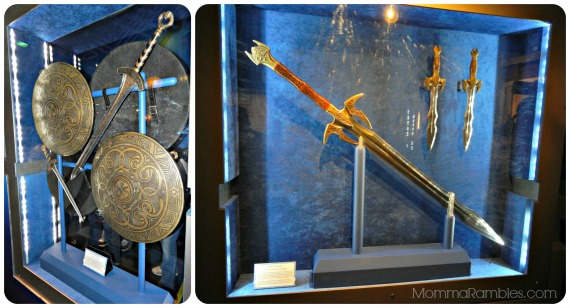 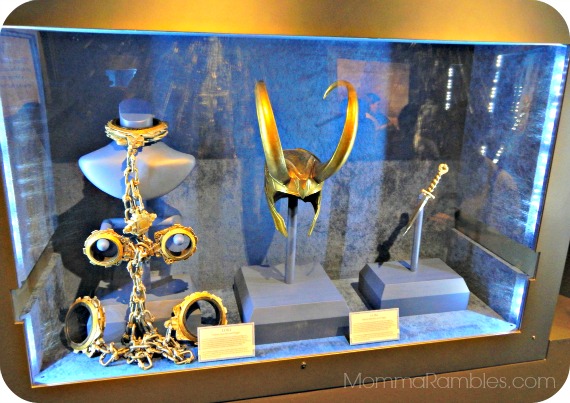 Without giving too much of the attraction away, you are then “transported” to Asgard (yes with awesome Disney theatrics involved). You then enter the Throne Room and see… 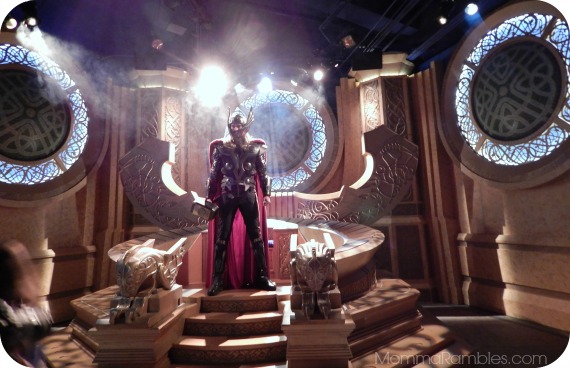 Luckily Thor is a pretty nice guy and has no problem posing for a picture or two with you. No worries if you forgot your camera! There is a Disney Photographer there to snap the magical moment for you. Just don’t forget to grab your ticket number from them so you can check out your photos online later. 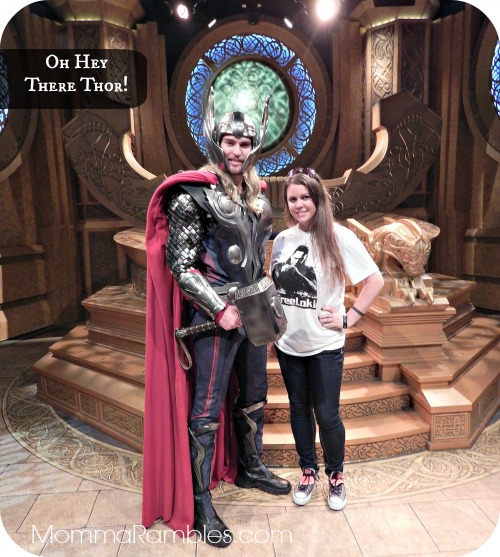 I have to say, it was pretty awesome to be one of the first people to go through this exhibit. Once exiting, I saw the line of eager fans quickly forming to check it out. I said it before, and I’ll say it again… If you are a Marvel fan, you definitely do not want to miss this exhibit! Meeting “Thor” made me even more excited for the movie premiere which occurred the following night. (Psst! Thor: The Dark World is out NOW! If you haven’t seen it yet… you are missing out!) 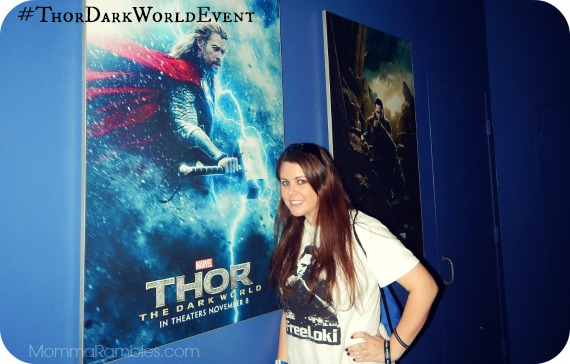 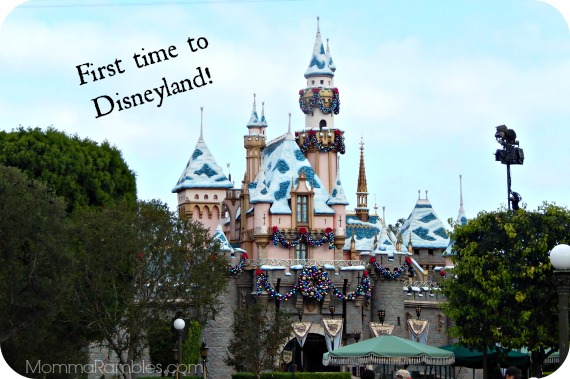 Since our group was so large, we decided to break up into 3 smaller groups to explore the park. I was with an awesome bunch of ladies, who the other groups dubbed the “crazy roller-coaster lovers.” Yes, we all enjoy thrill rides which is why we were put together. Definitely an awesome group of bloggers! Others may or may not have handed over their Space Mountain Fast Passes to us so we could ride multiple times!

Original Photo by DonnaHup.com. Edits by me.

Before we headed to Innovations, we rode the Indianan Jones ride, along with the Haunted Mansion and Pirates of the Caribbean. I was excited to see how the Pirates and the Haunted Mansion differed from their counterparts in Disney World. Pirates had similar scenes, but I could still spot many differences. Either way… still a classic fun ride!

Walking up to the Haunted Mansion, the outside of it looked MUCH different than the one I was used to in Disney World. Though the exterior wasn’t the only difference… the Mansion was decorated with a Nightmare Before Christmas theme for the holidays! Love it! Jack Skellington himself was outside the Mansion posing for photos and giving out autographs. If you are a fan of the movie, you are going to love how Disney changed up the outside and inside of the ride to fit the theme. I guess I have to come back another day to see the true differences in the rides… but I certainly enjoyed the Nightmare version! 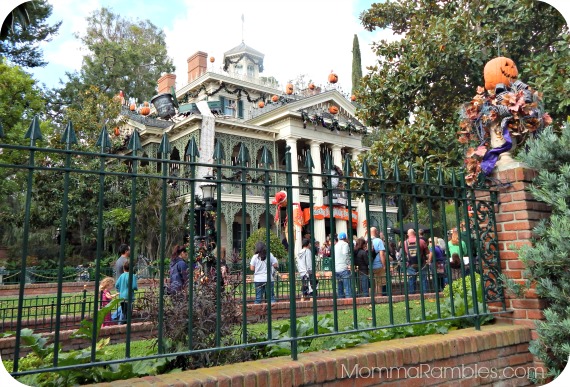 The Indiana Jones ride was awesome!! I really wish I could have had more time to ride that one a few rounds. Definitely a must-ride if you stop in Adventureland.

… And what would one of my posts be without an Instagram fun collage? 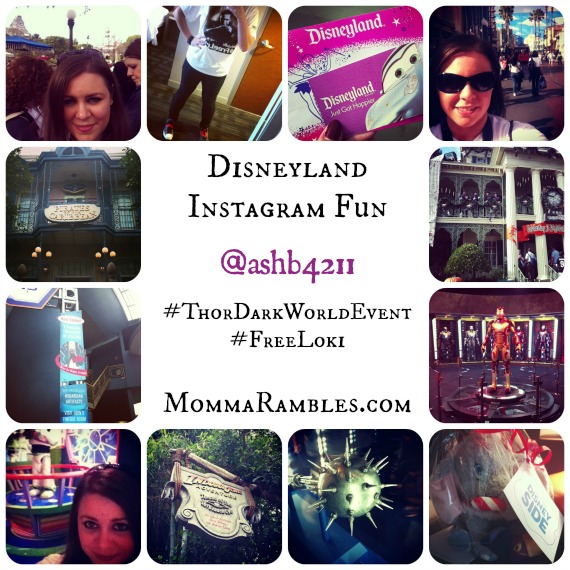 The Holidays Come to Disneyland 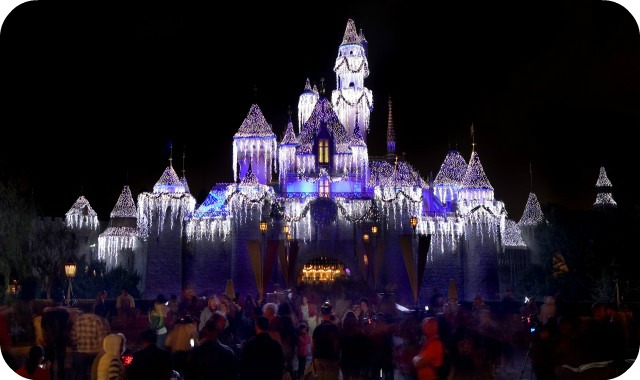 Here we are more than half way through November, and guess who is Holiday traditions are underway? That’s right, the Disneyland Resort just gets merrier with all their traditional Holiday favorites plus a few new additions:

“World of Color – Winter Dreams” premiered this past weekend. This is an all-new, holidays version of the very popular “World of Color” nighttime, water spectacular at Disney California Adventure Park. It features Disney’s latest film FROZEN which hits theaters later this month! That is one movie I can’t wait to see! (BTW, be sure to follow my fellow bloggers this week as they attend #DisneyFrozenEvent. Check out the hashtag to see all their FROZEN fun!) 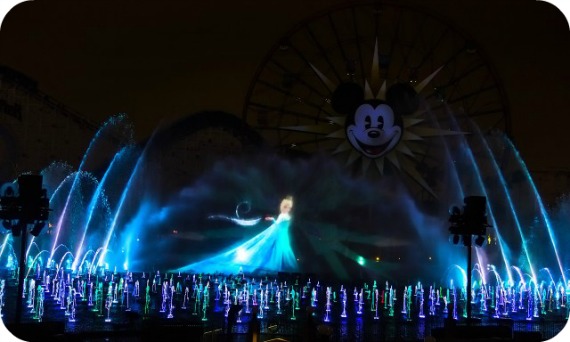 “Disney ¡Viva Navidad!” is a new celebration, inspired by Latino culture and celebrations, that features music, food, dancing and an exciting Street Party multiple times a day. It began on November 15th at Disney California Adventure. This precedes the January 3rd through the 6th Dia De Los Reyes celebration for Three Kings Day. 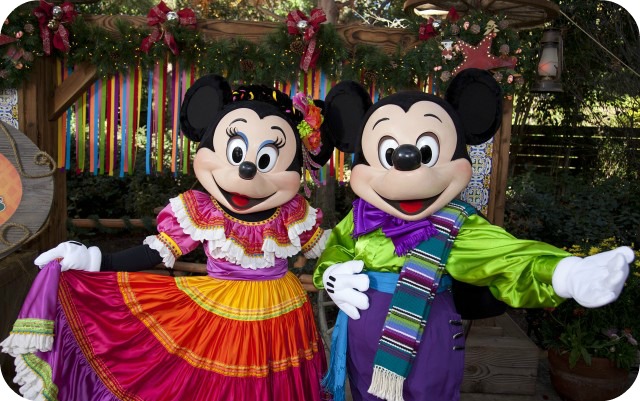 Jingle Cruise  is where the Jungle Cruise skippers decorate for the Holidays and add some fun new jokes to their riverboat tour. Check it out over in Adventure Land at the Disneyland Park.

Overall I had an absolutely amazing time at Disneyland and experiencing the Thor: Treasures of Asgard exhibit. If there was ever a time to head on over to this park… NOW is it! You’ll be able to experience some Marvel magic, all while enjoying Disney’s holiday cheer.

Don’t forget to connect with THOR on Facebook and Twitter! The film is out NOW! Yes, Thor: The Dark World is out. So I hope after you finish reading this post you are making plans to head to your local theater. It is definitely a must see.

While I attended an expense paid trip by Disney to the Thor: The Dark World Premiere, all opinions are 100% my own. Promotional Disney Holiday photos provided by Disneyland. All edits by me.