While I attended an expense paid trip by Disney to the press events for Avengers: Age of Ultron, Monkey Kingdom, and Agents of SHIELD, all opinions are 100% my own. 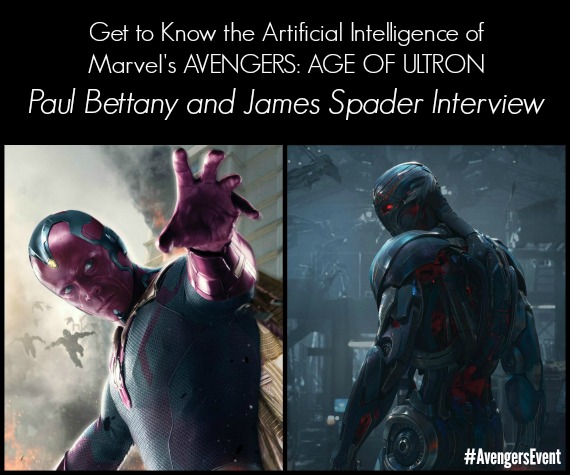 Marvel’s AVENGERS: AGE OF ULTRON has been out in theaters for a week now! With final weekend box office numbers reported, AGE OF ULTRON has come in with the second highest grossing weekend ever (second to 2012’s AVENGERS) coming in at 191.27 million dollars!!! How awesome is that? Hopefully you’ve been following along my #AvengersEvent coverage here on the blog! Today we are detailing the chat with the film’s artificial intelligence… Paul Bettany as The Vision, and James Spader as Ultron! Earlier this week I posted my interview article feauting Cobie Smulders (Agent Maria Hill) and Jeremy Renner (Hawkeye)! Make sure you check out my previous interview posts with Captain America and Thor aka Chris Evans and Chris Hemsworth, Marvel newcomers Aaron Taylor-Johnson (Quicksilver) and Elizabeth Olsen (Scarlet Witch), director Joss Whedon, and Kevin Feige, the President of Marvel Studios.

Now if you haven’t seen the movie, I don’t want to give too many spoilers away. I can tell you that Ultron, voiced by James, is an artificial intelligence created by Tony Stark for a pilot peacekeeping program. However, Ultron becomes quite overwhelmed with what I can describe as a “god complex” and soon his main goal becomes to destroy the earth. As for Paul Bettany’s Vision? Well, you’ll have to see the movie to find out how he comes about.