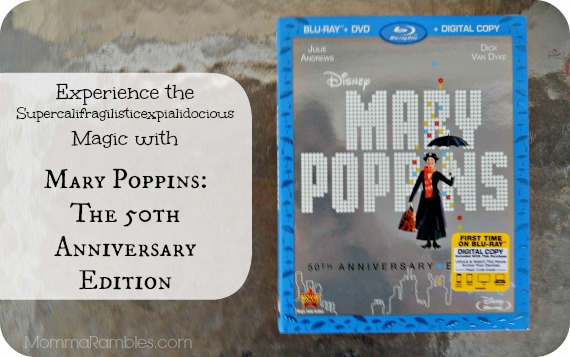 Growing up one of my absolutely favorite classic Disney films to watch was MARY POPPINS! I loved the music, the magic, and of course the dancing penguins. I was super excited to learn that Disney would release a special 50th Anniversary Edition of the film along with the release of SAVING MR. BANKS!

When the 50th Anniversary Edition copy arrive, I couldn’t wait to show my son. He had never seen the movie before, and I’m always excited to show him new Disney classics. Let’s just say he was also pretty excited when the movie arrived! With the cold weather taking over, it was the perfect movie to stay inside with and enjoy a Family Movie Night together.

Releasing from the Disney Vault in celebration of its 50th Anniversary, creative visionary Walt Disney’s classic shines for the first time on Blu-ray. Starring Dick Van Dyke and Julie Andrews in her Academy-Award winning role, and featuring iconic toe-tapping songs including “A Spoonful of Sugar” and “Supercalifragilisticexpialidocious,” Mary Poppins is a movie experience your family will enjoy again and again. An all-new digital restoration adds even more magic – helping bring the award-winning songs and amazing picture to life like never before. Share the music; share the magic; share the joy of Mary Poppins this holiday on Blu-ray Combo Pack & HD Digital December 10.