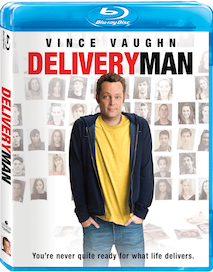 Back in November I had the amazing experience to attend the red carpet premiere of DELIVERY MAN out in Los Angeles! Hopefully you took time to read my review and see Delivery Man for yourself. Such a heartwarming family film you don’t won’t want to miss! On March 25th, this film will hit digital copy, blu-ray, and DVD.

In this heartwarming comedy, underachiever David Wozniak (Vince Vaughn) learns he’s actually an overachiever — he’s fathered 533 children via donations made twenty years earlier! David soon discovers that the shock of his life might just be the best thing that’s ever happened to him. Along the way he discovers not only his true self, but also the father he could become. Also starring Chris Pratt and Cobie Smulders — and complete with bonus materials, including behind-the-scenes footage — it’s a feel-good movie that really delivers.

I received the above information via Click Communications. All opinions are my own. 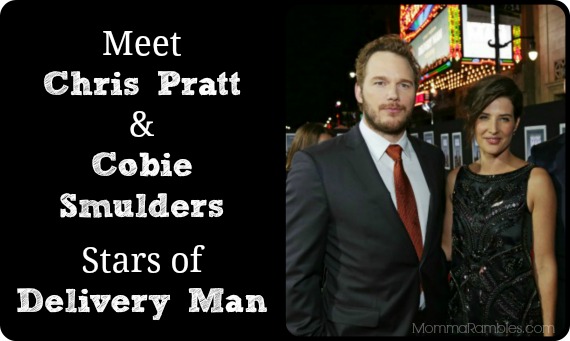 So I’m sure you know by now (especially if you’ve been keeping up with my blog updates) that DELIVERY MAN hit theaters over the weekend! I’ve already seen the film more than once and it had me laughing (and shedding a few tears!) each time. If you have a moment after reading this blog post, be sure to check out experience on the red carpet premiere of Delivery Man, as well as my review of the film and interview with Vince Vaughn. In the film Chris Pratt (Parks and Recreation, Zero Dark Thirty) plays Brett, who is the best friend and lawyer of Vince’s character David. Cobie Smulders (How I Met Your Mother, Avengers) plays Emma, who is pregnant with David’s child.

Cobie was the first one to arrive! Chris was running a little late due to traffic issues. His wife, actress Anna Faris, was so kind enough to tweet out that they were late using our official event hashtag #DeliveryManEvent!! How awesome is that? (Thanks Anna!). Before Chris arrived, we chatted with Cobie on how she become involved with the film. She noted that she had been a fan of the the French Canadian film Starbuck which Delivery Man is based off of. Cobie was a huge fan of the script and characters. Plus being Canadian, she loved that it was originally a Candadian film! Once she heard Vince Vaughn was attached to the film, she decided to go ahead and audition. Good thing she did, because as you can probably guess since we interviewing her… she got the role. It wasn’t long before Chris arrived!

As with the other interviews I’ve been posting, below I’ve included some highlights. Both Chris and Cobie were super-friendly and easy to interview. They seemed very genuinely happy to be part of the film

How did being a mom affect your role?

COBIE: This movie is really all about parenting. It’s all about what it takes to be a parent. So I automatically connected with that at the same time. I was pregnant in this film, and I remember just crazy emotions that come into play when you’re pregnant. I think that one of the things that I know I crave and I think that pregnant women do crave is stability. You’re in this situation where especially if it’s your first child a lot of things are unknown. In terms of this movie, the character of Emma, she has a very unreliable partner so she’s just sort of trying to figure all that out.

CHRIS: Well for me, my son was had just been born when I was doing this movie. I think he was maybe two months old. So for me I wasn’t necessarily able to relate to my character’s journey as a father in this movie because he’s like so overwhelmed with the idea of being a father. I was still finding every little tiny thing endlessly fascinating about my own son. I did miss him a lot. So there were moments in the performance where I needed to just stare off into space and think about something that bummed me out. The fact that I was away from him was something that I could go to if I needed to so that was, that was my way out.

END_OF_DOCUMENT_TOKEN_TO_BE_REPLACED

I’m sure with all my postings these past 2 weeks you know by now that I was able to attend the DELIVERY MAN premiere in Hollywood earlier this month. Fast forward a couple of weeks and guess what? The film is now out TODAY!! Even though I’ve already seen the film, I’m heading to the theater TONIGHT to see it again. Can’t wait!

DreamWorks Pictures’ DELIVERY MAN stars Vince Vaughn, Chris Pratt, and Cobie Smulders. Vince plays the affable underachiever David Wozniak, who is a delivery truck driver his family’s business, Wozniak Meats. In the beginning of the film, David finds out that his “sometimes” girlfriend Emma (played by Cobie) is expecting his first child… )or so he thinks!). To say David is shocked is an understatement. With his reputation of being unreliable, Emma ends up giving him the ultimatum to clean up his act and get it together… or just get out of her life for good. 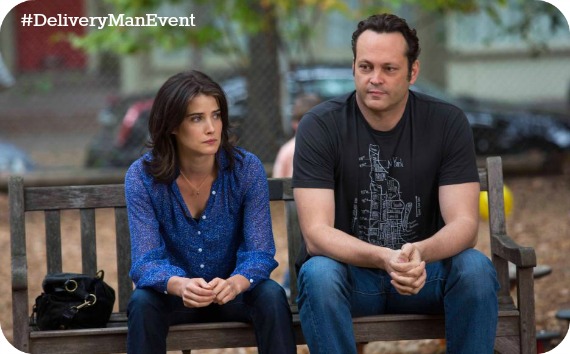 So back to the whole “expecting his FIRST child” thing. Yeah, that’s not the case. Turns out that his anonymous donations to a fertility clinic 20 years earlier resulted in 533 children. That’s right… David is actually expecting his 534th child! Not only that, but over 100 of his children are suing the clinic to find out David’s identity!

END_OF_DOCUMENT_TOKEN_TO_BE_REPLACED 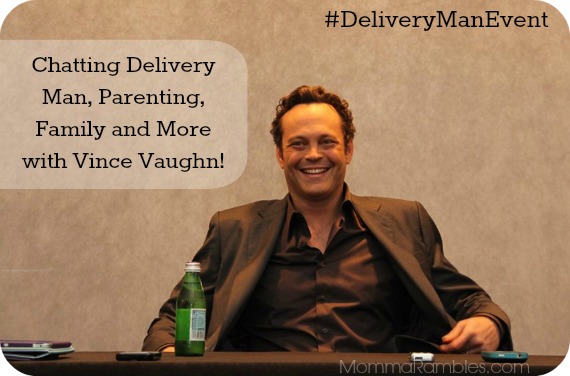 For 2013, I’m actually celebrating Thanksgiving this upcoming weekend. You see, my family lives up in New England, while I’m down here alone in Maryland. Due to their schedules, they weren’t able to make the trip down here for the holiday, but didn’t want to miss out on spending some Thanksgiving fun with me. So while they are here, I figured what better way to celebrate then heading out for a good ole fashion Dinner & A Movie Family Outing? Our film of choice? DELIVERY MAN! That’s right… Delivery Man, starring Vince Vaugh, Chris Pratt, and Cobie Smulders hits theaters this Friday, November 22nd. What better way to spend time with your family then to see a movie together that is all about family!?!?

While out in California to attend the red carpet premiere of Delivery Man, we had the pleasure to interview Vince Vaughn about his latest role. I was excited when I first learned I would have a chance to chat with him because I’ve always been a big fan. I enjoyed his performances in comedies such as Swingers, Old School, and Wedding Crashers. What is interesting about Delivery Man though… is that to me it wasn’t a typical “Vince Vaughn comedy”. This was a much more grounded role for him to take. The film definitely had it’s comedic moments for sure! However I loved that it was mixed with drama and heartfelt warmth.

Vince casually entered the room, warmly greeting us with his presence. When he thanked us for attending the premiere and after party from the previous night, one of the bloggers jokingly quipped back thanking him for the Delivery Man t-shirts and Wozniak Meats hoodies (thank you Dreamworks and Disney for the apparel!!). Jokes were exchanged how that even though we could now sport Wozniak Meats gear, we definitely were not cleared to be truck drivers and drive those big delivery trucks (like Vince’s character David in the movie). Vince joked back that even he still doesn’t know how to drive one of those big trucks! He quipped that they are much easier to drive in New York when the streets are closed off for you. 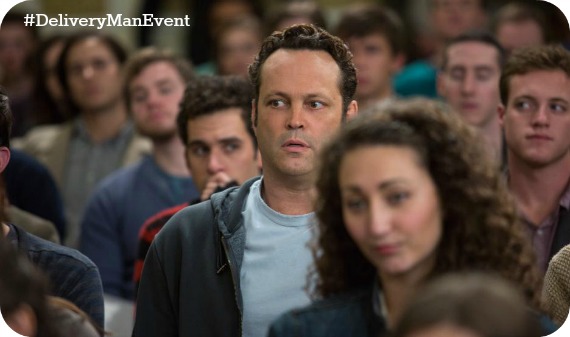 As with the other interviews I’ve been posting, below I’ve included some highlights. Vince was so down to earth and friendly. I’m used to seeing him on the big screen as this energetic comedian. In person? Very grounded, very genuine.

Why did you decide to take the role as David Wozniak (Vince’s role in the film)?

VINCE: The director is a very passionate storyteller. I think what he is doing with this story is really unique and inspiring. It’s not an overly obvious way in to some very kind of sentimental and universal feelings. The story makes you think about parenthood, life, acceptance, accepting yourself, and all those kinda things.

What’s interesting to me is nowadays movies can be just a comedy or just sentimental or just a drama. I think the skill set Ken (director Ken Scott) has, which is very unique, is that it is kind of all of those things in one movie. It’s makes it a very unpredictable story. You’re not quite sure what emotion is going to come next. I think being a young father, the hopes and fears that you have for your kids really is strong in those vignettes.

END_OF_DOCUMENT_TOKEN_TO_BE_REPLACED 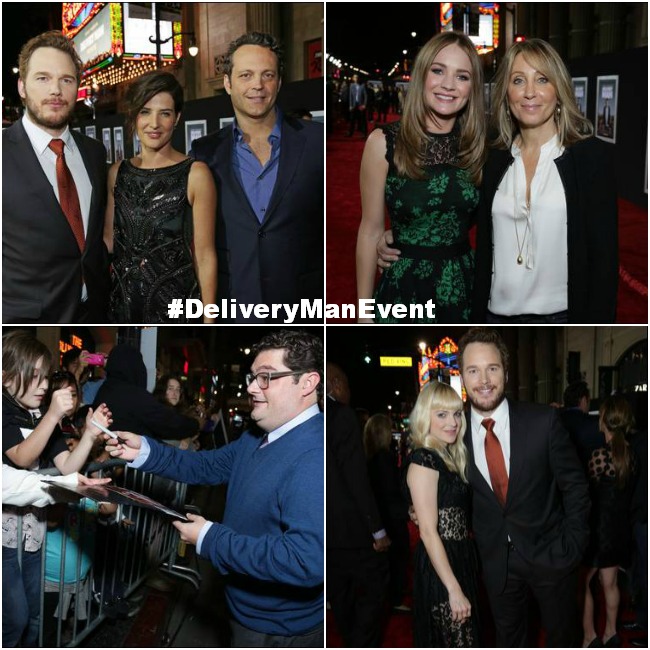