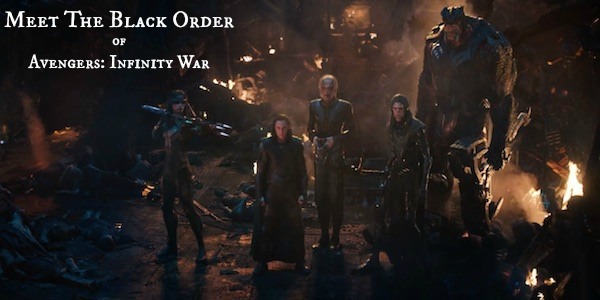 Unless you are a fan of the Marvel comics, you may not be too familiar with The Black Order, a supervillain team made up of nefarious aliens who work for Thanos. In the film, they are considered the (Adopted) Children of Thanos. Now you may be looking at the screen-grab above wondering is Loki part of the Black Order? Well, I’ll get to that in a minute. Prisoner or teammate, we won’t really know until April 27 when AVENGERS: INFINITY WAR hits the big screen.

With the most recent INFINITY WAR trailer, we got a better look at these villains. But who are they? Let me give you a quick run down of each character from the comics.

Corvus Glaive is the leader of the Black Order, with an expertise in warfare. His infamous weapon is a glaive, which can pretty much destroy anything by simply splitting atoms. In the comics, Corvus actually committed suicide after attempting to conquer the universe with his own Black Order in Thanos’ absence. However, the comics recently brought him back. In the first INFINITY WAR trailer, that is his glaive you see being used on the Mind Stone, embedded in Vision’s forehead.

When it comes to Proxima Midnight‘s combat skills, she is one of the deadliest fighters. In the comics she is actually the wife of Corvus Glaive, but I’m not sure INFINITY WAR will include that aspect. Her weapon is a deadly spear created from a star trapped in a distorted quantum state. The spear can follow its target and never misses! Well, supposedly. Did you notice the spear that Captain America caught in the first trailer? Well this is the best I could do screen-grab wise to get a look at her before she throws the spear…

Maybe Proxima’s spear isn’t as reliable and powerful as she thinks!

Proxima was also killed in the comics, actually by none other than… Hela! Yes, THOR: RAGNAROK Hela. However, she too, was brought back from the dead.

So interesting enough Cull Obsidian is actually the other name for the Black Order. This particular character that will be seen in the film, was known as Black Dwarf in the comics. Marvel Studios renamed him Cull Obsidian for the movie. He is the brother of Corvus Glaive and is known for his immense super-strength! In the comics he was killed by Ronan the Accuser, but I don’t think we’ll see Ronan again in the MCU until CAPTAIN MARVEL next March, which will take place before the events of GUARDIANS OF THE GALAXY. So we probably don’t need to worry about Cull Obsidian’s storyline following the comics.

Lastly we have the ever creepy Ebony Maw. That’s who you see torturing Doctor Strange in the trailer. His weapon? His intelligence and sadistic nature. Oh and he has a teleportation device and force field generator. No big deal, right? In the comics he’s the mentor to Thanos’ son, Thane. It will be interesting if Thane makes a surprise cameo in INFINITY WAR… 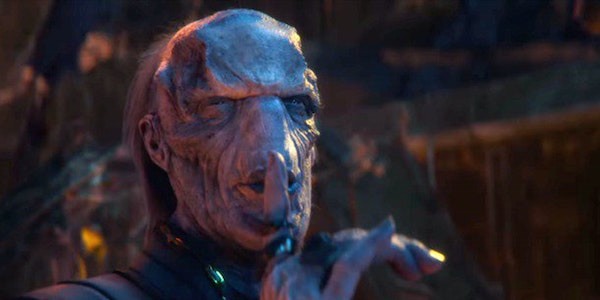 Okay, now back to Loki. In the screen-grab above, we see that he is with the Black Order. Why? Well, we don’t exactly know. What we do know is that Loki took the Tesseract from Asgard before Ragnarok. Since he is now in possession of the Space Stone, naturally Thanos is going to come looking for him. Since Loki is seen handing the Tesseract over to someone (the guess is Thanos) in the first trailer, many people believed that he returned to his evil ways.

However in this second trailer, Proxima Midnight has her spear aimed at Loki’s head. This brings up that theory that Loki is actually their prisoner, and indeed DID NOT join the Black Order.

It will be interesting to see how this scene plays out!

Yesterday I shared with you the new INFINITY WAR character posters based on the Infinity Stones. BossLogic created a fan art character poster of the same theme, featuring Thanos and the Black Order. Pretty cool, don’t you think? 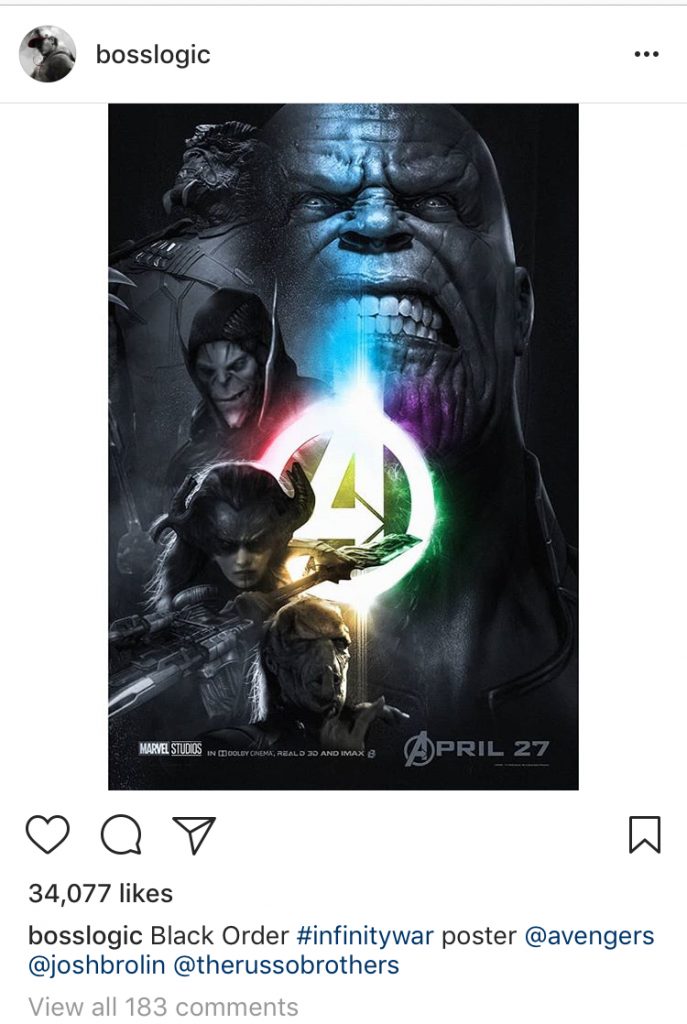 Now if you are excited to see the Black Order on the big screen and want to learn more about their storyline in the comics… you are in luck! This week in AVENGERS #686, the Black Order is the center of the story!

In the 12th chapter of AVENGERS NO SURRENDER kicks off with the Earth being stolen, and the Avengers as the last line of defense. In this week’s part, the Black Order attacks the Avengers HQ! Prepare for some epic battles featuring INFINITY WAR’s latest villains.

Don’t forget to check out our “Everything You Need to Know (or Read & Watch!) Before Marvel Studios’ AVENGERS: INFINITY WAR” guide!

Be sure to also check out my Infinity Stones Acai Bowl and The Mad Titan Burger, along with other Marvel inspired recipes here on my blog! I also have a Round Up Guide of all the MARVELOUS Marvel themed recipes!

Which BLACK ORDER character are you most excited to see on the big screen?

I received the above trailer as a blogger via Walt Disney Publications. All opinions are 100% my own.