Recently while out in California for the Monsters University Premiere, Disney offered me the oh-so-amazing opportunity to experience their latest summer film, PLANES! I was able to spend a fun-filled day at the Disney Toon Studios to experience all things PLANES. If you haven’t already, be sure to check out my Animation Session with Disney Animator Ethan Hurd.

Now Ethan was just one of the many individuals who worked on this film, and generously offered to discuss their line of work and the process with my fellow bloggers and I. Another individual I had the pleasure of meeting was Art Hernandez, a Story Artist for Disney. 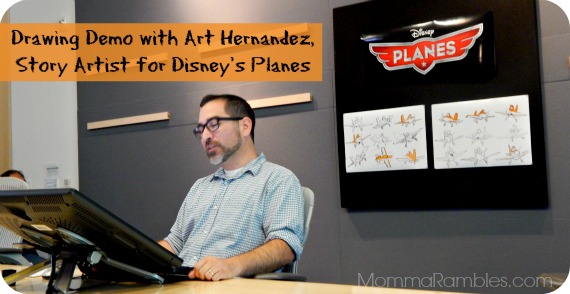 After studying illustration at Antelope Valley College and the Animation Guild’s American Animation Institute, Art went on to work for Disney as an “in-betweener” on Fantasia/2000.  In 2004, he started work at Disney Toon Studios as a character designer and story artist. Aside from PLANES, you can also see his drawings in Bambi 2, Brother Bear 2, and the four direct to DVD Tinker Bell movies.

What is a Story Artist?

It was really cool to hear Art tell us the details of his job as a Story Artist and the process for when he starts work on the characters. Now you may be reading this thinking “What exactly is a Story Artist???” No worries! I was wondering the exact same thing when Art told me his title. Story Artists are known for creating the storyboards of a film. In other words, they bring a script to life with their drawings! Art takes the screen play and comes up with the characters’ look and translates them into his illustrations.

Another fun aspect of Art’s job is pitching scenes for the film. Not only does he draw each character, but voices them as well! This helps give the director, executive, producer, or whomever Art is pitching to, an idea of what to expect in a specific scene. Art even gave us an example “pitch” of a scene between Dusty and El Chup! 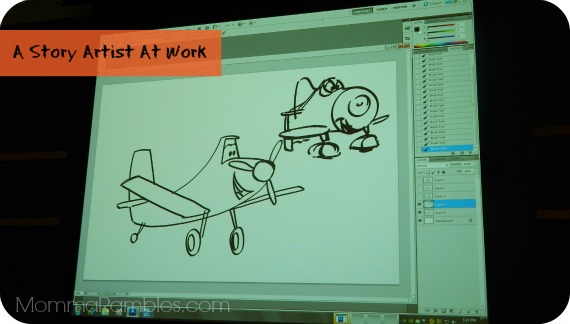 Now here came the fun part! Unfortunately I’ve always lacked what one considers artistic ability. In other words, I can’t draw. Watching Art draw his characters he made it look so easy! Then he turned the tables on us bloggers, and it was our turn to take the pencil and try our hand at illustrations. It was actually quite a fun process! Art took us step by step on how to draw Dusty. So sure my Dusty needed some work (okay, lots of work!), but he still turned out better than I predicted! 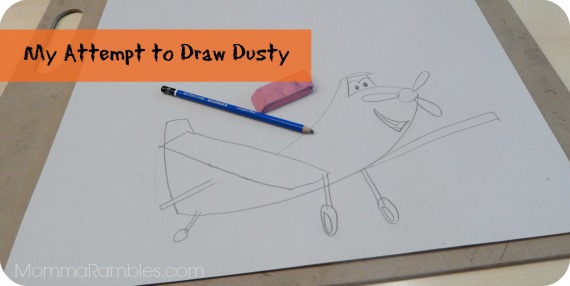 Be sure to follow the hashtag #DisneyPlanesEvent to learn more about all the fun my fellow bloggers and I had while out in California learning more about this film. Don’t forget to connect with PLANES on Facebook and Twitter! In all the excitement of the release, be sure to also follow the #DisneyPlanes hashtag for the latest information and news on the film.

Don’t forget to watch the teaser trailer below to catch a glimpse of the characters created by Art and the wonderful Story Artists at Disney! This film hits theaters on August 9th.