We are so excited that Marvel Studios’ BLACK PANTHER has thundered its way into our home!! You can now own this global hit on HD, 4K Ultra HD, Blu-ray and DVD! To celebrate the film’s release, we step behind the camera to bring you these fun number-crunching facts on the mighty new Marvel movie. Wakanda Forever!

2016 – The Marvel Cinematic Universe first welcomed T’Challa/Black Panther (played by Chadwick Boseman) in 2016, which is when the iconic character was introduced to movie audiences in Captain America: Civil War.

5 – Since its theatrical release in early 2018, Marvel Studios’ Black Panther has dominated the box office charts across the globe. In the USA, it was the first film in eight years to spend FIVE weeks at No. 1.

2 – Letitia Wright tackled TWO screen tests alongside Chadwick Boseman in order to win the role of Shuri in the Marvel movie. “One screen test took place in LA; the other in Atlanta,” admits the actress. 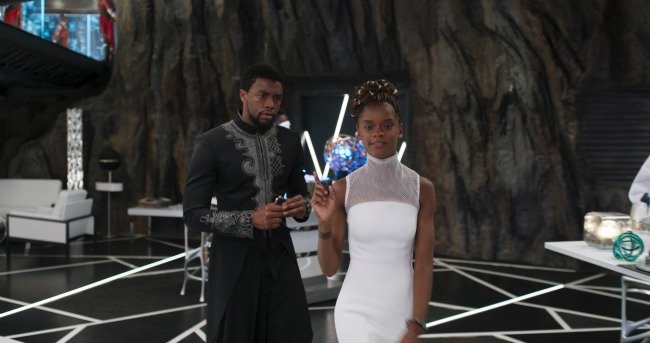 6 – Key cast members attended a SIX-week boot camp before the movie shoot began. “We all went to Atlanta six weeks early to get into shape,” reveals Lupita Nyong’o, who plays Nakai. “We got in a room with the stunt team and started to work out, as well as practice the fight choreography and combat skills. It was a lot of work!”

1 – Sebastian Stan – who appears as Bucky Barnes in one of the movie’s end tag scenes – spent ONE day on the set of Black Panther. “Sebastian Stan is a lot of fun to work with,” admits Letitia Wright. “We shot that scene outside at a lake, so there was no green screen. It was a great day.”

4 – The in-home release of Marvel Studios’ Black Panther is packed with never-before-seen featurettes on the making of the movie, as well as a director’s commentary, a gag reel and FOUR deleted scenes. U.N. Meet And Greet, Okoye And W’Kabi Discuss The Future Of Wakanda, T’Challa Remembers His Father and Voices From The Past are the names of the exclusive deleted scenes.

10 – Michael B. Jordan has an interesting description of his cunning Black Panther character Erik Killmonger. “He is always TEN steps ahead,” explains Jordan. “He’s very patient. That’s a very dangerous attribute to have as a villain because he’s going to sit and wait, and he’s going to plan and calculate every move. I like to think of myself as a forward thinker, and I love playing chess and seeing steps ahead. So that was something that I definitely connected a lot with him.”

3 – It wasn’t an easy task to transform Michael B. Jordan into Erik Killmonger. “The makeup process was very extensive,” admits the actor. “It took up to THREE hours to apply Killmonger’s scars every morning.”

90 – Close to 90 individually-sculpted silicone molds were added to Michael B. Jordan’s upper body for the shirtless fight scenes in the movie. Each of Killmonger’s scars represents a ‘notch’ of his kills over the years.

3 – In order to research the movie, production designer Hannah Beachler visited South Africa to soak up the culture for inspiration. “It was an invaluable research trip,” explains Beachler. “I landed in Cape Town and we traveled up the coast. We visited Durban, the Golden Gate [Highlands National Park]. KwaZulu-Natal, Spioenkop, Johannesburg, Oribi Gorge and Blyde River Canyon… And much more. In total, the trip lasted THREE and a half weeks, but it helped us immensely.”

4 – South Africa wasn’t the only location visited for research purposes. “I also went to South Korea for FOUR days,” adds Hannah Beachler. “We ended up shooting there for four months in total.”

200 – The design of W’Kabi’s armored rhino is based on the white rhino, which is the biggest rhino in Africa. “During our research trip to South Africa, we saw two of the animals,” explains production designer Hannah Beachler. “We were probably 200 feet away from one of them!”

2 – T’Challa’s little sister Shuri is SECOND-in-line for the throne behind her brother. She’s the smartest person in Wakanda; a top scientist and the innovator behind the Black Panther’s updated suits and technology.

4 – Look closely at the iconic Kimoyo beads in the movie and see if you can spot the nsibidi symbols in their design. Production designer Hannah Beachler explains: “Nsibidi is a Nigerian language, which dates back as far as the FOURTH century.”

1 – There is ONE primary bead in each set of Kimoyo beads. “The primary bead is the first bead you’re given when you’re born in Wakanda,” explains Hannah Beachler. “It’s a little different from the other beads. It has a peak on it.”

4 – Did you know that there are FOUR tribes in Wakanda? Merchant, Border, Mining and River.

4 – It was a lengthy process to create the mammoth Warrior Falls set for the movie. Construction took about FOUR months from start to finish!

25,000 – More than 25,000 cubic feet of foam was used in the Warrior Falls set, which was sculpted to match the rocks in Oribi Gorge, South Africa.

300 – When the cameras stopped rolling, there was a fun vibe on the set. “One of the funniest moments during the shoot occurred on the Warrior Falls set,” recalls Danai Gurira, who plays Okoye. “Out of nowhere, the drummers started to drum Drop It Like It’s Hot – and everyone else joined it. There were about 300 people there that day, and everyone started to sing along. There were all these Marvel and Disney execs on set for the scene and there were all thinking, ‘What is going on here?’ But they loved it. It was really, really, fun.”

700 – The movie’s costume designer, Ruth Carter, searched the world from Ghana to Los Angeles for the textiles and accessories she needed to create the 700 costumes for the film.

120 – The wig of the waist-long, silver-haired dreadlocks of Queen Ramonda was an intricate piece. It was made up of 120 pieces of hair that were rolled and handmade into multiple dreadlocks for the actress.

1966 – The groundbreaking character of Black Panther made his first appearance in Marvel Comics in Fantastic Four Vol. 1, Issue 52. The comic book was published in 1966.

50 – Marvel Studios president and Black Panther producer Kevin Feige couldn’t be happier for audiences to witness the iconic new Marvel movie. “When the Black Panther character debuted in the ‘60s it was a daring move for the Marvel bullpen of Stan Lee and Jack Kirby to introduce this new character, an African character who is smarter than many of our other heroes and is stronger than most of our other heroes,” Feige explains. “To be able to put that on the big screen FIFTY years later is incredibly exciting for us.”

2015 – Andy Serkis was always game to revisit the role of the South African arms dealer, Ulysses Klaue in Marvel Studios’ Black Panther. The character first appeared in the MCU in Avengers: Age of Ultron back in 2015.

2005 – Although Chadwick Boseman was familiar with the iconic African super hero, the Black Panther comics really came on his radar with Reginald Hudlin’s run, which was first published in 2005.

8 – Film fans can rejoice in the fact that Marvel Studios’ Black Panther will be available to enjoy in the comfort of your own home as a digital release in HD and 4K Ultra HD™ and Movies Anywhere on May 8.

15 – You can also own the 4K Ultra HD™, Blu-ray™, DVD and On-Demand version of Black Panther. These were released on May 15.

Earlier this week I shared with you my interview with BLACK PANTHER Executive Producer, Nate Moore. In this post I also mentioned and detailed some of the amazing bonus features you’ll recieve with the home entertainment edition of BLACK PANTHER. Check out the clips below from the Comic Book and Script Writers Roundtable and Wakanda Revealed, which is all about Wakanda’s tech!

Want to see more of my adventures in LA? We can connect on Twitter (@AshBG) and on Instagram (@ashb4211). Make sure you check out the hashtags #InfinityWarEvent, #Quantico, #ABCTVEvent, and #BlackPantherBluRay!